Harpist in the Garden of Gethsemane 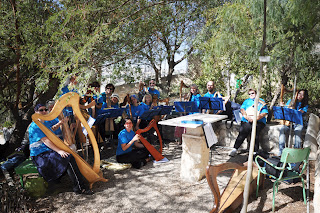 The School of the Prophetic Harp interceded overlooking the Old City of Jerusalem in the Garden of Gethsemane. When we first arrived in the Dominus Flevit compound, the atmosphere was chaotic. Dogs were barking, the muezzin was ranting anti-Israel tirades over the mosque loud-speaker, there were tourists groups being addressed by their leader and the occasional hymn being sung. The over-all feeling in the air was that of a cacophonic sound-scape. Then, the harpist began to play. Slowly a definite change began to take place. Strangely, the muezzin began to sing in the same key as we were playing. The dogs stopped barking and birds sang joyfully in response to the harps. Finally, the singing of the people also merged into our key. You had to be there to believe it!

Tonight, around 8:15 Jerusalem time, we will be playing our harps just above the Western Wall in the Old City of Jerusalem. Our objective is to change the spiritual atmosphere over the city with a new sound from heaven. Please pray for this time of intercession. You can download a copy of our schedule and pray into the various spiritual warfare operations that the harpists will be undertaking by going to this link to our website:
www.propheticharp.com/schedule

Shalom from Jerusalem
Posted by School of the Prophetic Harp - Jerusalem at 4:07 AM

School of the Prophetic Harp - Jerusalem